I joined Stonecore through the dungeon finder tool. And the group was me as balance druid, a resto druid, protection paladin, warlock and mage. Only the resto druid had been there before, but he explained the trash and bosses. When we entered the instance everyone had problems with freeze lag, so we stood there and waited for it to be gone for like 10 minutes. People had to relog, restart the game etc.

Here is my video from the run, it’s in two parts, watch in HD for better quality. I know it looks small but couldn’t get it uploaded to YouTube in larger cause then I would loose the HD quality, but maybe I’ll put it up on Filefront or something.

– What kind of gear did your group use? What item level, where the gear came from, etc.

Everyone had ICC25/10 HC and some greens/blues from Cataclysm quests/instances.

– What level were you and your party members for the dungeon run in question?

– How long were the boss fights?

– Was there trash that felt obnoxious? unfair? took forever to kill?

The trash was ok.

– Were crowd control mechanics used for trash pulls? If not, how was tank damage?

We had to poly and use succubus on many trash pulls.

Our healer was good and his mana seemed fine.

– Did anyone run out of mana?

I did run out of mana after a few trash packs, and on the final boss I was oom when it was 1 min left of the fight, used Innervate and pot. Not sure if the mage and warlock had mana problems. The healer was low some times.

– Were there mechanics in the dungeon that were unclear?

No, our healer had been there before and explained everything.

– How many times did the party wipe? Where did the wipes occur?

We wiped on the trash when we forgot to CC the earth shapers, once on the first boss cause the tank died, and once on final boss cause of many adds and tank died.

On like the 3rd trash pull in the start we dpsed Millhouse Manastorm till he ran down to where the first boss is an a lot of adds spawned, four earth shapers and some warbringers, and we already had four adds left to kill, two were CCed. Of course we wiped. Went back in and they were gone.

I did have mana problems on the trash and bosses, I used my Innervate on every CD and popped a mana pot when Innervate was on CD and I was oom.

I think my spells are too expensive, they cost so much mana, or my regen just sucks. I was careful with spending my mana, so I didn’t use Moonfire and Hurricane. I didn’t have any mana talents, but with this experience I might get 3/3 Furor earlier and Moonglow.

I really miss the old regen, but I know it was too overpowered because we never went oom. But it feels like Innervate is too weak, I don’t know how mages Evocation works but I the mage in the group didn’t seem to have any mana problems.

Besides that my damage was fine, I had Recount damage meter installed to check my damage. We were three casters and did about the same damage, at least on single target.

I think the Stonecore was a fun instance, it’s the third Cataclysm instance I have been to and this had the most fun bosses. I don’t usually like this dark, stone cave instances, but this looked different. The bosses were different and not just tank and spank. The trash also had some new abilities which are good.

I didn’t have any quests for the instance, if there are any, but I really wonder what Millhouse Manastorm is doing there, so can’t wait to find out more about it.

Also there was no music in the instance, looking forward to hear it, I think the Deepholm music is really good.

Overall I had a lot of fun in Stonecore and it’s absolutely a great instance.

Watch in HD and fullscreen for better quality

The quests for Twilight Highlands start at Garrosh Hellscream in Orgrimmar.

On the way there you get attacked by Twilight drakes and Garrosh’s zeppelin gets destroyed, and then the zeppelin you’re on goes down aswell. You have to jump out in a parachute and you get back to the remains of the fleet and they tell you that Garrosh is nowhere to be found, and they still have to follow his plan, so you get a quest to help them negotiate with the Dragonmaw’s warchief Mor’ghor. It doesn’t go well but you survive and get rescued Zaela.

The Horde have a new plan to attack the Dragonmaw so you can slip in and get help from Zaela and the medicine man cause the Horde warriors are dying and need help. You get in and return with bandages soaked in dragon blood, it will make them recover fast but the dragon allies wouldn’t be happy if they knew.

If you are going to be making it anywhere in this kelp forest, you will need a reliable mount. I think that I have spotted something that might work, friend. Tie off a lure at the rope just west of us, and then mount the seahorse that it will attract. Be warned, you may need to work hard to break the beast.

Because Vashj’ir is a underwater quest zone you have to swim, and you get a buff called “Sea legs” which increases your sea floor movement by 60% in in one of the first quests in Kelp Forest, but it’s not fast enough.

So at level 80 you can get this quest called The Abyssal Ride from Erunak Stonespeaker and the reward is the Subdued Abyssal Seahorse which increases speed by 280%. I think it’s a follow-up quest so you might have to do some of the other quests in the zone first to be able to take it.

The Abyssal Ride on Wowwiki and Wowhead.

Frapsed this last time I was in Throne of the Tides, because there was a bug where you could mount a party member’s mount like if it was a multi passenger mount, so here is a short video of it. Was a bit funny.

And adding a few new screenshots from Vashj’ir. 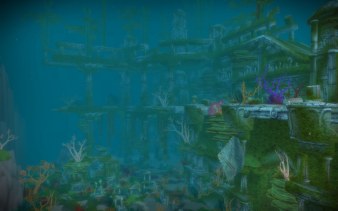 I’ve been waiting for this since they announced Cataclysm and last week the music was finally out on YouTube, from the beta files I guess. Blizzard’s music department don’t like that people do that, but they understand we’re excited and I’m one of those who couldn’t wait for the launch to hear it.

I had really high expectations cause I loved the music from Vanilla, Burning Crusade and Wrath of the Lich King. I’m a huge fan of classical, orchestra and choir music from games.

I have many favorite tracks, but I will try to only list a few ones here. Ok, that’s too hard.. I’ll pick some favorites from Wrath of the Lich King:

So I started to listen to the Cataclysm music. Most of the tracks are from new and old zones, some themes for races and events. I haven’t heard them enough times yet to say what I think about them, and kinda need to hear them in-game, in the zone with ambience etc.

But what I can write about is the Cataclysm main title, oh my, I’ve been looking forward to this for such a long time.

I remember when I first heard the WotLK main title, my jaw dropped and I had goosebumps all over. The music made me so excited and happy, it still does. I listened to it all the time, like every day, everywhere, on my phone, PC and the mp3 player I had back then. Had it as ringtone till I got my iPhone and sometimes when I log into WoW I wait a bit with the authenticator to listen to the music.

I think it’s hard to explain how music makes me feel sometimes, how I hear and experience it, I don’t know if anyone will understand how excited I am about all this music. I have never met anyone else who love this music as much as I do, but I bet there are some out there somewhere.

I found a video with the music and footage from Cataclysm beta made by 1Nefti1, very good quality and the music and clips fit perfect together.

Now I’ve been listening to this music for hours, over and over again. First time I heard it was like two days ago but I didn’t really have the time to sit down and listen so carefully, so I did it first now.

And I’m so impressed! I had very high expectations and thought I would get disappointed because of it but no way, I didn’t.  This music brings back so many good memories from the first time I saw the WoW trailer, played the game, heard the “Legends of Azeroth”. I love how they re-use “old” songs in the newer expansions, they did the same with Wrath of the Lich King and Burning Crusade.

Some of the songs here, the worgen part 8:37-9:28, reminds me of Disney movies, not sure which ones and why, but it’s only positive. The Gunship battle music is my favorite boss fight music in Icecrown Citadel cause it’s just so perfect and exciting, not that the fight is very exciting at the moment, but the music sure is!

Uldum is the land of the titans and Ulduar was also made by the titans, so I hope they will make similar music in the Uldum instances with choirs, cause I loved the Ulduar music and was so happy when I heard it in the main title. It sounds so powerful and I really wonder what the lyrics are, if there are any, maybe it’s only made up lyrics for the sound of it. Saving one of the best parts to the end: Invincible! Nothing can ever beat this song. What else can I say, it fits perfectly in.

Just have to say: Thank you, Russell Brower, you’re the best composer ever!

Have to add that The Instance podcast had their #200 episode August 23rd, with special interviews with Russell Brower, Veronica Belmont, Felicia Day and Tom Merritt. Check it out here.

A new dungeon in Abyssal Maw in Vashj’ir.

Lady Naz’jar: Naga. Phase 1: tank the boss, move away from the blue water vortex on the ground and the green fungal spores. Phase 2 at 66%: She banishes herself into a vortex and is invulnerable. Three adds will spawn, kill them. Repeat till she’s dead.

Commander Ulthok : Faceless one. Make sure everyone is topped off at all times, avoid dark fissures, he can pick up a random player and squeeze them for 5000 dmg per second for 4 seconds. 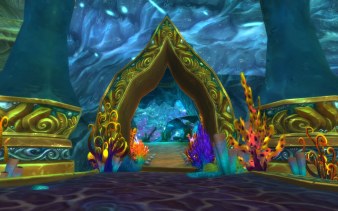