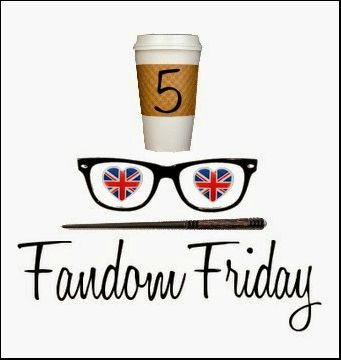 I know we’re supposed to post this on a Friday and everyone else posted this first post last Friday, but I read about it a few days ago and it took me a while to finish this post, so my post is a bit late. I will try to post the next topics on the Fridays as supposed.

I might have been 10 or 11 years old the first time I heard about Harry Potter. It was at a sleepover at my cousin’s that his mom read a chapter of a book she had read for him every evening. I remember laying in bed and listening to her read about the three-headed dog, Fluffy, and how Harry, Ron and Hermione had to get past it to get to the philosopher’s stone. It got me so interested and I had to know the whole story, so I got my hands on the book and read it. After that I was so hooked on Harry Potter that I wanted to buy everything Harry Potter themed that I saw in the stores. I had a Harry Potter pencil-case with Harry Potter content like pencils, ruler and eraser and Harry Potter posters on my walls. They sold Harry Potter cookies, chocolate frogs with cards, Bertie Bott’s Every Flavor Beans, candy wands and much more which I just had to buy. I went to watch the first movie in the cinema and bought it on VHS so I could watch it over again.

I read all the books as soon as they were released and watched all the movies in the cinema. I got the books as audio books a few years ago because I traveled a lot and wanted something to listen to besides music. I still got the audio books on my iPhone and I listen to them whenever I’m bored, when walking home, on the bus, train or if I have trouble falling asleep. Listening to the Harry Potter books always make me entertained and relaxed and I can’t imagine that I’ll ever stop listening to them. It’s also a tradition for me to watch the Harry Potter movies every Christmas.

I started playing WoW in 2007 because some friends played it and they kept talking about it all the time so I wanted to see what it was all about. So I bought the first game and created my first character, a male tauren warrior called Syrcorax. I loved how I could run around in a big world and explore every corner of the map. There was so much to see and so much to do. Everything was new and I was a total noob, but I had so much fun. I joined a raiding guild at level 70 and started raiding Karazhan. Since then raiding was my passion and I didn’t stop until 2013.

I’m still playing but not as much as before, just very casual, and I will continue to play as long as I enjoy it. I want to learn more about the lore, follow the story and see how it progresses through future patches and expansions. Explore new worlds and see new content until it all ends. If it hadn’t been for WoW I would never have started this blog and I would never have met my boyfriend. So I can’t even imagine how my life would have been now if I never started playing.

I don’t even remember the first time I heard about Narnia, but I might have been between 5 and 8 years old when someone read the books for me. Around the same time the Norwegian TV channel NRK had a kids TV show called Julemorgen every morning during the Christmas holidays. They sent one episode of the BBC-produced TV series The Chronicles of Narnia every day during Christmas, and every Christmas for several years. I remember watching it every day and every year. It was such a magical story, the greatest adventure I knew of and I loved it so much.

I was ever so happy when I read that they were making new Narnia movies though I at first was afraid they would ruin the great legacy C.S. Lewis left us, but I was pleasantly surprised when I watched the movies in the cinema because they were so amazing and perfectly made! I still watch them every Christmas.

His Dark Materials is a fantasy trilogy by Philip Pullman. The books are called Northern Lights (also known as The Golden Compass), The Subtle Knife and The Amber Spyglass. I don’t remember how I first heard about these books but I think I borrowed them at the local library. The main characters in the books are Lyra Belacqua and Will Parry. Lyra is from a world where people have daemons which is a physical manifestation of a person’s soul, in an animal form that reflects the person’s character. Will is from a world like the one we live in, without daemons, but otherwise very similar to Lyra’s world. We follow Lyra and Will as they travel through a series of parallel universes where they meet witches, armored polar bears, ghosts and angels.

These books are some of my all time favorite books because the story is so deep and the characters are so real that I’ve spent a lot of time thinking about the story and the different topics in the books even after I finished reading. I love how the books lead you through some of the biggest questions in life, in science, philosophy, religion and history. It makes you look at the world around you and think that maybe things are different from what they seem. I think I’ve read the books three times and I might read them again soon.

The movie The Golden Compass is based on the first book. It’s a pretty good movie, but of course the book is so much better! Also the movie is more like a family or children’s movie, while the book is more suitable for young adults or older adults. I would love to see the two other books as movies but I doubt it will happen anytime soon. Maybe someone will pick it up again some day and make three amazing movies as they should be.

I think I was 9 years old when I got my Nintendo 64. I had been looking at it in the local toy store and told my mom I wanted it for my birthday. Then one day when I was at a friend’s house across the street my mom came over and told me she was just going to the store to buy something and she would be back soon. A little while later she came over again and told me I had to come home because she had something for me. We went home and this big wrapped package lay on the coffee table. I had no idea what it could be but I unwrapped it and there it was: A Nintendo 64 with Banjo-Kazooie. It wasn’t even my birthday. I was so happy!

My mom and I played a lot together. First Banjo-Kazooie, later The Legend of Zelda, Mario Party and plenty of other games. She helped me understand the games because they were all in English, and she even helped me through the scary parts in Zelda, like the well, the Shadow Temple and the Forest Temple where there were enemies like the Redead, Wallmasters and the miniboss Dead Hand. These games mean a lot to me because they were my first games and they got me interested in adventure games. I’ve bought all the Nintendo consoles and all the Zelda games since, sadly I haven’t got the Wii U yet but I will buy it as soon as the Zelda game is released.

What are your fandoms that made you who you are today?