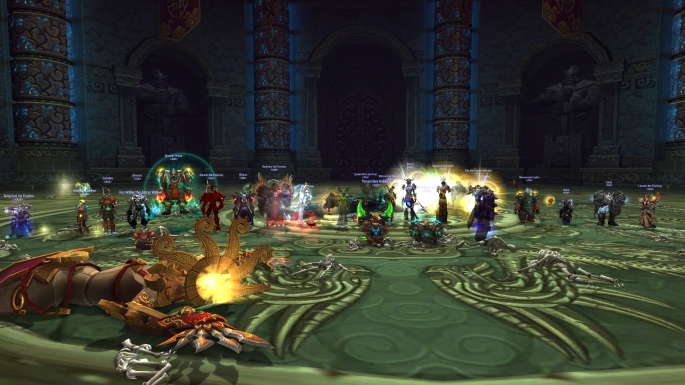 My guild, Ash, has been doing very well this patch and especially after we started on heroic modes. It surprised me that we got this far so fast cause we usually get stuck on some boss or have trouble with getting a full raid, but not this time. We only raid three days a week but we still try to do our best and get as far as we can cause we all want to progress and see all heroic content.

We started out in Throne of Thunder heroic and killed Jin’rokh March 21th, Horridon April 7th, Tortos April 14th, Megaera April 28th, Ji-Kun May 5th, Iron Qon May 19th, Council of Elders May 23th, Primordius May 28th, Durumu June 2nd and Twin Consorts June 4th. So our kills have been continuous till now, but we might be a bit stuck on Dark Animus which I’ve heard is one of the hardest bosses, so much RNG and things that annoy the shit out of us, but we almost had him last week, or well, we had a few very good tries so hopefully we will get him down this week and face Lei Shen next week!

I think all bosses are very well made but some are really annoying like Tortos with all those spinning turtles which knockback you if they get close, Megaera with the frost beams you have to kite across the room, and Iron Qon with the tornadoes… I’m not sure if I have a favorite boss yet, cause there is something annoying with every one of them and I’m starting to get a bit bored of farming the same bosses over and over again, I’m more into progressing, but Ji-Kun is kinda fun when I’m in the fly group and Primordius cause I’m mostly on the small adds.

I’m really looking forward to Lei Shen cause it’s supposed to be very hard and it’s a fun fight on normal so it can only be better on heroic, or that’s what I hope.

Check out our guild website http://www.ash-guild.com for more screenshots and videos, content is on Swedish as we’re a Scandinavian guild. 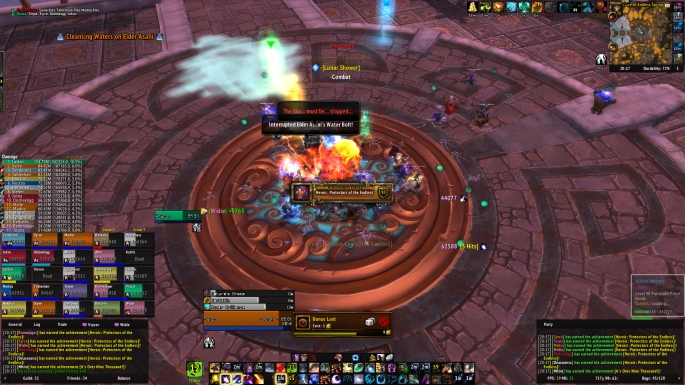 The new patch is almost here and to be honest I haven’t had much time to read about it yet but hopefully I’ll get some time to read up on the new bosses before our first raid in Throne of Thunder. I’ve been so busy with my life cause there is a lot new going on at the moment, and I’ve just had time enough to raid two to three times a week.

I missed a lot of first kills in heroic Heart of Fear and a few in heroic Mogu’shan Vaults, but this month our focus has been on heroic modes in Terrace of Endless Spring and I finally got to be there on our first kills of Protectors, Tsulong and Lei Shi. Protectors was my favorite of those three, Lei Shi is kinda annoying and Tsulong is a bit boring, but it was still fun to progress on them. I’m proud of my guild and our progress this tier, they/we’ve done very well and I’m looking forward to see how we’ll do in the new raid.

But raiding with a 25 man guild isn’t just happiness and fun, not always. Because there are 25 people or more there are so many different personalities, people with different thoughts on how to do things and how serious and hardcore we should be, how we should react when people fail etc. It’s usually not a lot of drama or arguing on vent and in guild chat, but some people have a tendency to throw out rude and unnecessary comments when others do something wrong, fail, forget or misunderstand. I do not like that, cause it ruins the mood and I don’t feel like raiding anymore, at least not with people like that. I want us all to be friends and try to say things in a good and helping way even if people fail, cause yelling and complaining won’t help them to better. Now I make it sound like it’s really bad and happens a lot which it doesn’t, but it’s still enough for me.

I wonder how other guilds deal with stuff like this. 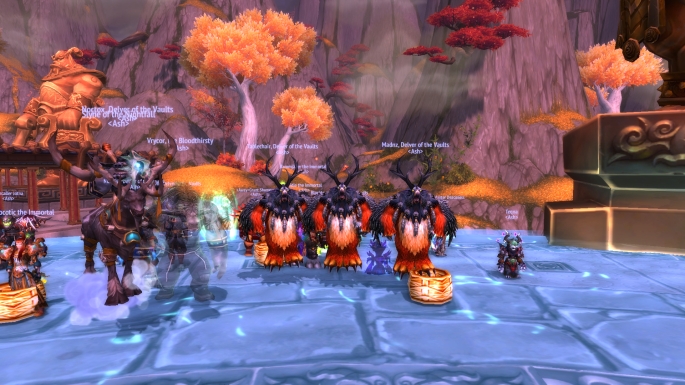 As you might have read here already I’ve been away from raiding for a month from mid December to mid January. At first I missed it and then it felt really nice not to have to worry about the days, what time it is, gear, pots, flasks etc. But I started missing it again after a while. I got back two weeks ago and started raiding again. Everyone had much better gear than me now as they’ve killed quite a few new heroic bosses while I was gone, but I think I performed very well despite my gear being worse than others and not knowing all the tactics as good as them. 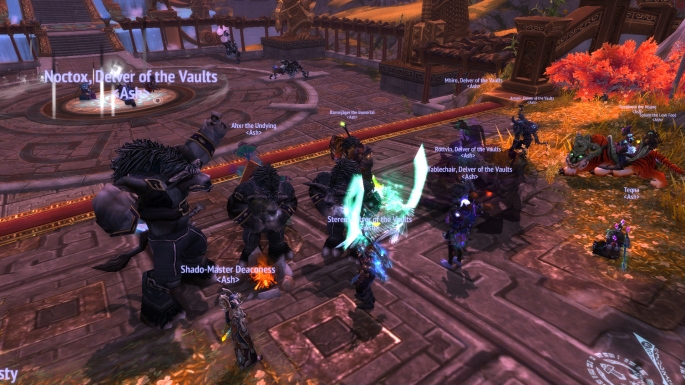 It felt nice to be back and progress on Imperial Vizier Zor’lok and Lei Shi. We killed Imperial January 29. and Lei Shi February 5th. Imperial was hard at first cause it took us a while to figure out which tactics worked best for us and for people to learn how to avoid all the rings. Lei Shi was challenging cause of the adds which spawns and how to control them.

I think we’ve done really good this patch, progress wise. Maybe a bit slow in the start, but we picked it up and now we’re realm 5 but we’ve killed 1 more boss than the 4th guild.

We’re not doing Mogu’shan Vaults anymore cause we’re trying to focus on clearing Heart of Fear heroic, only the final boss left. So we decided to make a group for Mogu’shan 10 man heroic, but as usual we’re missing tanks. Plenty of dps and healers. People still need gear from that raid, including me. I just wish people had more time to help, especially tanks, but I guess we can’t really expect anyone to have time on off days. But hopefully we’ll get a good group together every week so people can get their BiS gear.

I’ve never had a break or pause from WoW since I started playing in 2007. Except for when the guild had breaks or pauses during summer, Christmas or whatever to visit friends, family or go on holiday, and that doesn’t really count as a break or pause in my eyes as I was still playing when I had time or wanted to, and I started up again as soon as I got back or raids got back on.

But this Christmas felt more like a break or pause, though it wasn’t really. I haven’t been raiding since mid December cause that’s when I went to visit my family and friends who live far away and I needed some weeks with them cause I don’t see them often anymore. It has been a month now and I’m sure the guild and the other raiders are wondering where I’ve gone, even though I wrote on the forum and told our guild master that I would be gone for some weeks, I just didn’t know how long.

I’ve missed a lot of raids now and some new heroic kills. I really wish I could be there and I hope they know I’ll be back very soon. I hope they haven’t replaced me and that I’ll still get a spot when I’m back. Cause I’ve tried my best to get online and do some dailies, looking for raid, scenario and heroic when I had the time. I think they will understand and be ok with it, so everything will be as it was before. But I’m not sure cause some of my previous guilds haven’t been that happy with raiders being away from raids for weeks even if it was a good reason for it. They might get demoted, no loot for weeks and weeks, no spot in raids or even get home to discover you’d been kicked. I know my guild wouldn’t do that, but it’s no fun when you think back on what’s happened before, it just takes a while for me to forget and feel secure.

I know there will come a day when I’ll think about quitting and actually do it. I have thought about it and what the reason would be. It might be work, school or family. And I know that right now I should focus more on work etc and I will, I won’t prioritize WoW over my real life cause I can’t afford it, but I don’t want to quit. That’s why I like my guild and hope they’ll understand if I can’t have 100% raid attendance cause of work or family. I’ll still attend enough raids to keep my raider rank at least for as long as I can.

I’m wondering how so many of you can handle everything in life and still raid. I know many bloggers and people I’ve seen on Twitter got fulltime jobs, family and kids, blogs and other activities and they’re still raiding. What’s the secret? And how long do you think it’s ok to be away from raiding?

You might be wondering what’s going on as it’s so quiet here and on Twitter. Well, right now we’re raiding one night a week, clearing everything in a few hours, and I don’t play much besides that as there isn’t exactly much to do in the game right now. It’s nice with a small break from WoW and more time to play other games like Diablo 3 and do real life stuff.

I guess it’s always like this when summer hits, but especially now with no new content. People are going away on holiday, some are bored with the game, others are playing Diablo 3, some are busy with exams, and most of us are waiting for MoP. At least that’s how it is now in my guild. The question is whether or not we should take a raiding break until MoP so people don’t get disappointed and angry when we don’t have enough people for a raid or if some people don’t want to raid. Cause that has happened a few times and it’s not good when people get upset.

I understand that people want a break now and it’s a good time to take a break cause there is nothing to do. I hope my guild comes to an agreement about what to do soon, so we can all be happy and look forward to MoP.

How’s your guild handling the summer?